A lot has changed in life over the last several years. Getting out on the boat became a fair bit harder with the addition of one child, and then a second. Then there's owning a country property that was too small to start, so we added one addition...then a second. Both of which are nearly complete.

With the rural domestic lifestyle taking hold, Matt and I were increasingly longing for the water again. We were both browsing Yachtworld all last year to see what we could find, and decided in December that we should just do it and get a proper sail boat. Less than two weeks later, we went boat shopping and decided on a beautiful 1974 C&C 35 mk II by the name of Maverick V. The pandemic delayed our delivery cruise to Kingston by about two months (which worked out well because May would have been too cold anyway. The end-of-July passage we ended up with was much warmer and pleasant), but we have enjoyed about two months of her close to home. We both work full time with our oldest in school, the youngest in daycare, so the weekends are really our only time to get out. We try to make the most of our days that we can get out on the water.

We have been gradually easing the kids into sailing, and they're taking to it quite well now. Julia loves the boat as much as we do. Our son, Owen is getting there, but he's only 21 months, so it's been a bit more of an adjustment for him. He has learned to hold on to something in the cabin though when the boat gets heeling.

We have spent a couple of weekend days at an anchorage for lunch either in the Thousand Islands, or near Kingston, we did one non-stop sail to Kingston Penitentiary and back, and last weekend we did a motoring loop of Howe Island, with a bit of sailing when the wind kicked up briefly. This past weekend we did our first excursion to an island to explore. Thus far, we hadn't left the boat once leaving the marina, and we wanted to spend an afternoon checking out one of the islands with some trails.

We chose Cedar Island. It was one Matt and I have been to before quite a while ago with a couple of friends on Sunset Chaser. The docks looked like they had been freshly installed this year. They were well built, with sturdy cleats, and the wood didn’t look sun damaged or weathered at all. After some sandwiches onboard, the kids were excited to go and explore a little. 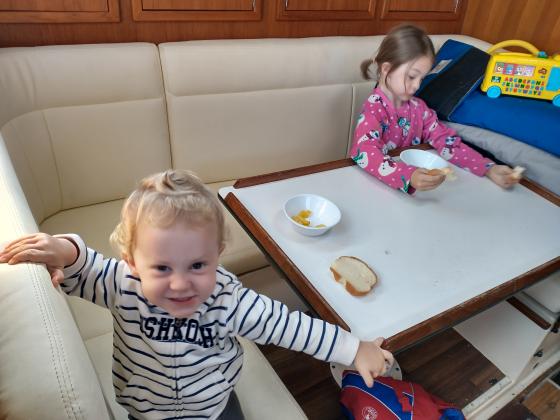 The climb up was a little steep, but nothing that a 5-year-old couldn’t easily handle. Once up the initial steps and rocks, the walk was really nice. Just enough ruggedness to feel like you were out in the wilderness, but not overly hard. We stopped at a clearing with some logs as benches, and a campfire pit, and the kids had a good time “cleaning up the forest” by filling a hollow in an oak tree with acorns. The squirrel to find that stash will probably think it hit the jackpot.

After that stop, we continued on to the fortification that was built on the west end of the island in the 1800’s to defend against the Americans. None of the fortifications built in and around Kingston were ever used, but they all still stand today, and any degrading bricks are lovingly patched up with concrete occasionally. They don’t look as big from the water as they do up close. The kids had fun trying to climb up the base of this one, but mostly were interested in chasing the huge crickets and picking up even more acorns.

It was a really rewarding trip out. We didn’t get the sails up because of the lack of wind, but it was refreshing to get out for a hike in the middle of the day, in between two calm motors between the island and our marina. Just being out on the water at all is relaxing and freeing. We have been watching a lot of sailing vlogs over the last 9 months, and we dream of sailing to Madagascar or Bahamas or Croatia one day. But it’s nice to experience a little bit of that within an hour of home on a Saturday afternoon.